James Fallows has a long, excellent essay in this month’s Atlantic about how most Americans are increasingly disconnected from the US military. And one big consequence is that politicians tend to give shockingly wasteful defense programs a free pass.

A great example is the F-35, a class of futuristic combat aircraft that has been plagued by endless glitches and cost overruns. Fallows estimates that taxpayers could end up losing 100 times as much money on the F-35 as they did on Solyndra, the solar firm that famously went bankrupt after receiving a government loan guarantee. Yet Solyndra dominated political discussion while the F-35 gets far less attention:

[T]he F-35 is an ill-starred undertaking that would have been on the front pages as often as other botched federal projects, from the Obamacare rollout to the FEMA response after Hurricane Katrina, if, like those others, it either seemed to affect a broad class of people or could easily be shown on TV—or if so many politicians didn’t have a stake in protecting it.

One measure of the gap in coverage: Total taxpayer losses in the failed Solyndra solar-energy program might come, at their most dire estimate, to some $800 million. Total cost overruns, losses through fraud, and other damage to the taxpayer from the F-35 project are perhaps 100 times that great, yet the “Solyndra scandal” is known to probably 100 times as many people as the travails of the F-35. Here’s another yardstick: the all-in costs of this airplane are now estimated to be as much as $1.5 trillion, or a low-end estimate of the entire Iraq War.

Let’s break down this comparison a bit:

Solyndra was a start-up firm with a relatively novel approach for making solar panels that don’t require silicon. And, back in 2005, Congress had enacted a loan-guarantee program to help support innovative energy companies that were having trouble getting financing. Because the program would be taking risks, it was budgeted to lose at least some money.

In 2009, the Obama administration gambled on Solyndra with a $536 million loan guarantee and lost that bet, as silicon-based solar panels became cheaper and drove the firm out of business. That was undeniably a bad call — and the administration later backed three other clean-energy companies that went bust, bringing losses up to $780 million.

But that was only part of the story. The Department of Energy’s loan-guarantee program also backed a number of other successful companies — including Tesla Motors, which has fully repaid its loan — and is now expected to turn an overall profit of at least $5 billion over the next few decades. Of the 30 companies the government backed, 20 are now generating revenue.

Then there’s the F-35. Fallows argues that it’s debatable whether the platform will be a worthwhile upgrade over previous fighter jets (you can read up on that debate here or here). What is clear is that its costs have been skyrocketing. When the program was first approved, Lockheed said it could develop and manufacture 2,852 planes for $233 billion. That price tag has risen to $397.1 billion for even fewer planes — and that doesn’t count the costs of fixing the glitches uncovered in testing. Defense experts have pointed out that the contracting, development, and testing phases were full of problems.

And the fiasco has now been felt around the world: “In theory, the F-35 was meant to knit U.S. allies together, since other countries would buy it as their mainstay airplane and in turn would get part of the contracting business. In fact, the delays, cost overruns, and mechanical problems of the airplane have made it a contentious political issue in customer countries from Canada and Holland to Italy and Australia.”

Yet Solyndra got lots of political attention while the F-35 got virtually none. Mitt Romney repeatedly hammered on Solyndra in 2012. Congressional Republicans held countless hearings on it, even though they couldn’t find any scandals. All the while, few officials have given the F-35 the same noisy scrutiny. President Obama has barely mentioned it. There has been plenty of great reporting on the aircraft debacle — Rajiv Chandrasekaran wrote a terrific Washington Post piece in 2013, and Politico has frequent coverage — but it hasn’t punctured the public consciousness in the same way.

There are lots of plausible reasons for that. Republicans like defense spending and don’t like green energy, so they’re more inclined to highlight problems with the latter. But it’s not just the GOP. The Pentagon has become adept at making sure big, costly programs like the F-35 are spread out among contractors in lots of different congressional districts, building bipartisan support. As Fallows notes, even Sen. Bernie Sanders (I-VT), a longtime critic of military spending, has been trying to get an F-35 unit assigned to his state.

Whatever the reason, the disparity in focus is striking. Roughly one-fifth of the federal budget, or $643 billion, went toward the military in 2013. That got cut a bit recently thanks to sequestration, but it’s still more money than Medicare spends: 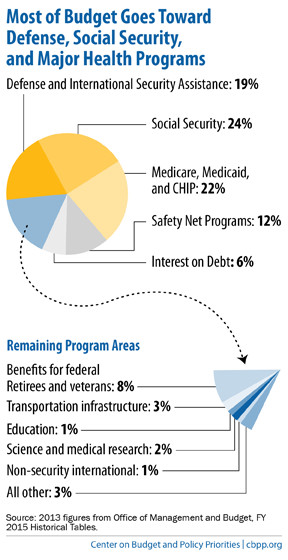 And there’s less public discussion about how these billions are actually spent than there is with other parts of the government. Fallows reminds us of that moment in the 2012 presidential debates when Obama made a sarcastic retort to Romney about how we now have “fewer horses and bayonets.” Funny one-liner, sure. But this was the entirety of their discussion about the US military’s spending priorities.

Further reading: Read Fallows’ full piece, which is only in small part about defense spending. And he’s posting a lot of follow-up emails — here are a few on the F-35 specifically (including some that make the case for the project).

via This military program lost 100 times as much money as Solyndra — yet no one talks about it | Vox.