About halfway through Tuesday night’s Fox Business debate, Rand Paul and Marco Rubio got into a heated exchange about Rubio’s tax plan that turned into a fight at the center of conservative politics: spending versus security.

Rubio probably won the exchange in the audience’s eyes, but Paul came away making his mark in this debate on a signature issue in a way he hadn’t until tonight.

Here’s how it played out. Rubio proposes to increase the child tax credit substantially — but doesn’t tell us how he’s going to pay for it. Paul calls him out for this and unfunded increases in defense spending — and that’s when things get weird and a little angry. Rubio thinks strengthening the US military is sometimes more important than cutting spending. Paul does not. Here’s the exchange:

RUBIO: We can’t even have an economy if we’re not safe. There are radical jihadists in the Middle East beheading people and crucifying Christians. The Chinese are taking over the South China Sea. Yes, I believe the world is a safer — no, I don’t believe, I know — the world is a safer and better place when America is the strongest military power in the world.

Note that Rubio doesn’t even try to say how he’d pay for the tax cut. He just goes straight to accusing Paul of making America vulnerable.

There’s a core ideological disagreement underneath the rhetoric. Paul has long struggled to sell his non-interventionist foreign policy to Republicans, especially since the rise of ISIS last year. He’s trying here to frame his views in economic terms: The US just can’t afford to spend more money on defense without unacceptable tax cuts.

Rubio’s response, essentially, is that the US economy depends on the strength of its military. We can’t grow our economy if the global economy is under threat from the likes of ISIS and China, and only more spending on defense can stop them.

It’s worth noting that this is absurd. So far, there’s basically no evidence that either ISIS or Chinese adventurism in the South China Sea are doing serious damage to the US economy, let alone making it so “we can’t have an economy.” Nor is the US at risk of getting surpassed as the world’s largest defense spender anytime soon, as this chart of defense budgets from Bank of America shows: 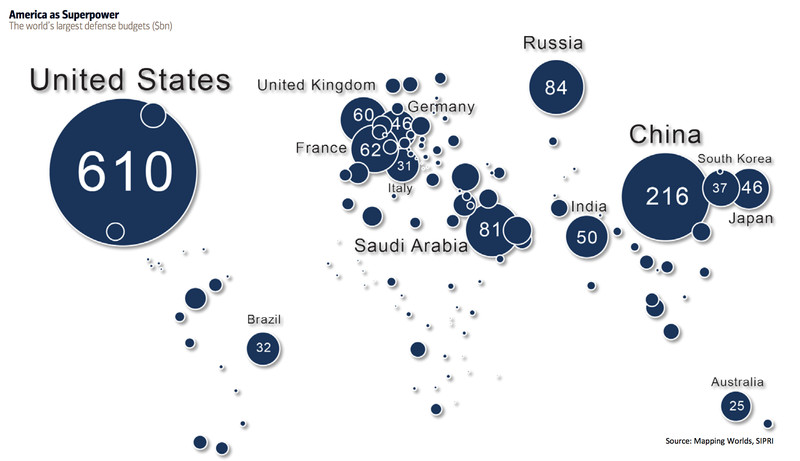 So Rubio’s defense spending increase is not necessary to prevent the American economy crumbling under foreign threats. But if the huge applause that greeted Rubio’s comments are any guide, Republicans seemed to side with him rather than Paul.